Do you believe in magic?

I have always had a secret love for magic…and I’m pretty sure that my brother is to blame for it. I remember one year he received a variety of magic tricks as a gift, and even though they were very simple tricks for his age, they were still interesting. Then came the David Copperfield specials on television….then David Blaine, and my interest in magic continued. I love anything that challenges your mind and makes you say “How did they do that?”

However, as I got older, I felt like the magic scene had dwindled down a bit. I caught a Criss Angel show in Vegas on one of my trips, but other than that and a few random magic acts at various kids’ birthday parties, I didn’t see much around my area.

One day I saw one of my friends posting on his social media pages that he was doing magic. I remember thinking…”I never would’ve pegged Jason as a magician.” Jason and I had gone to high schools in the same part of Northeast Ohio, then we ended up going to the same college for undergrad. I remembered him being a college athlete at Thiel, but nothing involving magic rung a bell.

As time passed I saw Jason getting busier and busier with magic. Eventually I noticed he had gotten married and his wife, Stacy, was getting involved in the magician life, as well. I saw photos and videos of their various shows and of them performing strolling magic throughout the area, and it was obvious that they were a top magical act, not just around where we were from, but the whole country. 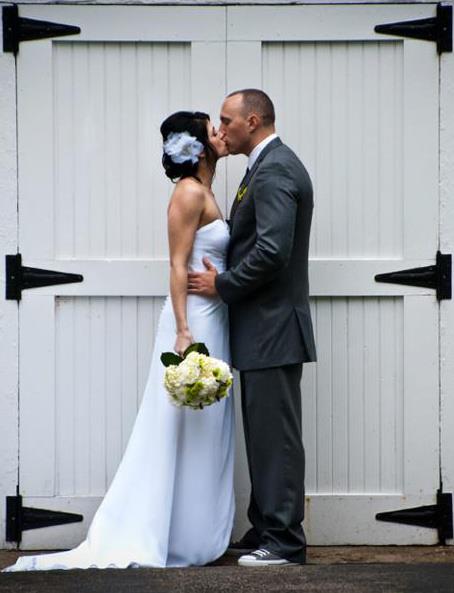 Jason and Stacy on their wedding day

The Alans now do magic full time and can be found anywhere from private events to corporate functions to my favorite brunch spot, Town Hall, where they not only perform magic but make incredible balloon animals for the restaurant guests. If you are looking for a great date night idea, they recently signed on to be one of the acts performing at The Metropolitan on the 9 and have a variety of dates you can choose from. 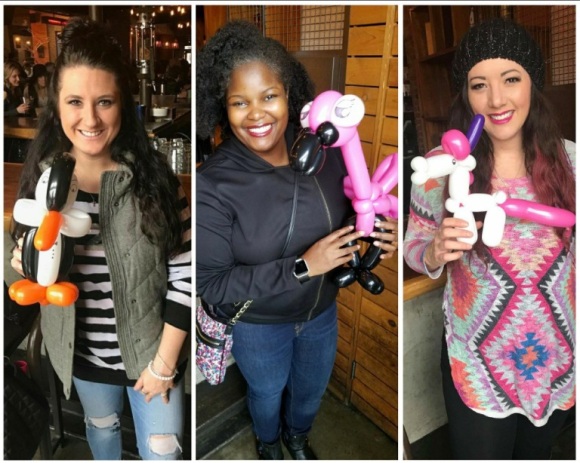 Balloon creations Stacy made for us while at Town Hall for brunch.

I recently chatted with The Alans because I had questions that I wanted to know, and no, none were related to how they perform the tricks they do.

How long have you been practicing magic?

Stacy: I’ve been practicing magic, mainly mentalism for around 5 years. I always loved watching magic growing up but didn’t begin learning how to perform until I met Jason.

Jason: Magic has been a part of my life since I was 13.

Do you specialize in any certain area?

Stacy: I specialize in mentalism which focuses on psychology and effects involving the mind. Some people may call it psychological illusions. I’m not a medium or psychic but rather use observation skills, psychology and body language to pick up on information from people and things.

Jason: I specialize in standup comedy/magic and close-up sleight of hand. Originally, I focused on a magic philosophy made famous by David Blaine and his mentor Paul Harris titled “Astonishment”. The idea was to strip away all of the stereotypical sides of magic (rabbits, corny jokes, glitter) and perform something with the least amount of words that was truly unexplainable.

When I began performing for larger crowds I found a passion in stand-up comedy and storytelling. I started attending open mics honing my comedy chops which complimented my sleight of hand.

What was the A-Ha moment that made you want to get into magic?

Stacy: For me it was when I first met Jason and watched him perform with such passion and could truly see that he loved what he did. I wanted to be part of that. I started off assisting and helping him set up and tear down. This was okay at first, but I realized I wanted to contribute more. I loved the idea of us being in business and traveling together. The other big push for me was early on in our marriage when I was working as a full-time therapist. Jason was performing in the Bahamas and I was at home in Akron getting stuck in my driveway full of snow. I knew then that I really wanted to have more freedom with my work to go places with him.

Jason: While visiting family in California I watched a street performer at Venice beach and I was instantly hooked. Around this time David Blaine was becoming big and I would watch and study his specials. I performed for friends and family then turned professional when I was 22. A few years later I was hired to work on a cruise ship in the Bahamas on and off for 2 years.

What differentiates you from other magicians?

Stacy: The biggest thing for me is being a female who has a lead role in our show. Most people only think of women as assistants in the magic world. We also stand out being a duo act…..again being a husband and wife act who don’t fit the typical magician and assistant mold.

Jason: I think the amount of hours I’ve spent performing in restaurants and bars has allowed me to be fully in the moment and aware of my environment. Why does this set me apart from other magicians… Performing sleight of hand is like patting your head while rubbing your stomach as you ride a unicycle on the edge of a cliff. The difference being.. nobody can know you are doing all of those things at once.
When a magician first learns a “trick” they are focused on the sleight of hand and not on how to make a human connection. I hope and think that years of working in the trenches has allowed me to pay attention to the person in front of me, to notice what mood they are in and to know which way to steer the current effect I’m performing.

What kind of events do you do?

Our main area of focus is corporate events. We travel nationally bringing our show and strolling magic to sales meetings, conferences, trade shows and corporate holiday parties. Our newest venture is our very own theater show in downtown Cleveland. We just got the news that our show has been picked up for the entire 2018 season at the Alex Theater which is on the second floor of the Metropolitan at the 9 hotel. In years past the bulk of our performances have been for private events…..now with the Alex Theater we have a monthly show that’s open to the public. It’s really exciting for us; we wrote a brand-new show just for this unique venue. 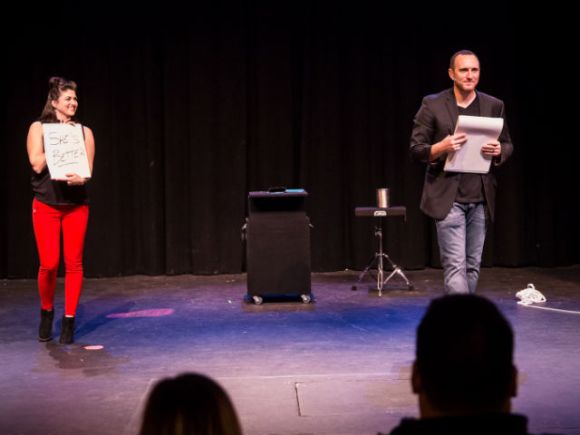 What is your favorite thing about magic?

Stacy: My favorite thing is the reactions. I love creating real moments with people that hopefully will stick with them for a while.

Jason: My favorite thing about magic… with the current volatile climate we live in it’s hard to find something that still makes us think…. Magic does that. For over 2 years we have performed at TownHall in Ohio City (Cleveland)… the most successful restaurant in Northeastern Ohio. Each week we interact with thousands of people visiting, living or passing through the city. Each week I approach people who are left wing, right wing, American or Foreign, White or black and when I start performing, none of that matters. For a minimum of 60 seconds we are just two people sharing something truly unique.

Just a week ago, during a performance in my hometown of Salem, Ohio I pulled a 6 year old girl onstage who didn’t speak English. After 10 minutes of being onstage with me she went from a shy scared little girl to the star of the show. Watching someone smile through something so simple and nonjudgmental is worth doing what we do.

Are you self taught or did you complete formal training?

Stacy: Jason taught me a lot of what I know; he also supplied me with a library of magic and mentalism books to read and study.

Jason: I’ve had hundreds of mentors over my career. From people who directly taught me to those who have passed single lines of inspiration to me.

In 2008 I traveled to Las Vegas and learned under an amazing performer by the name of Steve Daily. Steve was on Criss Angels original television show Mind Freak and currently performs on the Las Vegas Strip.

What can a guest expect from one of your shows?

Guests can expect to be directly involved. Our show is highly interactive. We are not a typical big illusion magic show. We use objects and thoughts from the audience to create unexplainable moments. Our real hope is that people come into our show not really knowing what to expect or thinking they know what magic is and we take them in a whole new direction. We want people leaving knowing that they loved it but not sure how to explain what they just experienced. 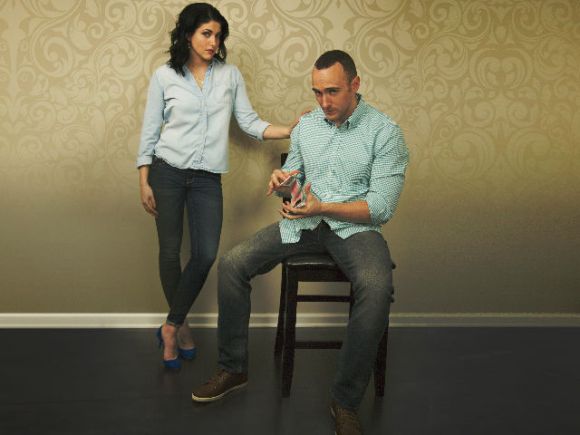 Have you always practiced magic together or when did you become a duo?

Stacy: I’ve only ever performed with Jason, however I will be doing my first solo show for a client in April.

Jason: When we first met we had a deal.. Stacy would never perform with me. During this time I was working on a cruise line in The Bahamas and to travel with me.. she had to be onstage. During this time she would walk onstage and hand me props as an assistant. I noticed her passion for being onstage and began teaching her sleight of hand. We quickly realized it wasn’t for her.

With her background in Psychology we saw an opportunity for her to take center stage. I pointed her in the right direction and she began training as a mentalist. Around this time she spoke at the Youngstown Ohio TedX talk on breaking boundaries about woman in magic and how she is perceived.

Currently we both learn new tricks and try to fool each other.

Can I just say I have some seriously talented friends???!!!! These guys are the real deal, and I know they are just getting started with their career in magic. You need to fit one of their shows into your calendar and fall in love with magic all over again!

If you want to learn more about The Alans or book them for an upcoming event, please visit their website by clicking HERE!