Brooks Was Here; So Was Katie

“Hope is a good thing, maybe the best of things, and no good thing ever dies.” -Andy Dufresne Isn’t that an amazing quote? I cannot think of a single human being that cannot connect to that quote in some way. Ahhhhh, The Shawshank Redemption. One of my absolute all time favorite movies. I literally will watch it every single chance I get like it’s the first time, and if you have cable and TNT, you know that’s pretty often. I’m okay with it, though. It is a classic with an amazing message, and it just makes me feel great when I watch it.

Take this as your instruction to watch it if you haven’t.

Speaking of favorites, I have blogged many times about my love of running, so when I learned about an event several months back that combined running with Shawshank, I didn’t hesitate to sign up. That event, my friends, was The Shawshank Hustle, which took place last weekend in Mansfield, Ohio.

This building is just amazingly cool to look at it.

I am fortunate to live not far from the Mansfield Reformatory (it’s only about an hour from our house), and I frequently pass Mansfield as I go back and forth to Columbus….yet after all this time I have never visited. To be 100% honest, part of me has refrained from visiting because I have heard countless ghost stories about the prison, and I think we all know I am a little bit of a wuss with that stuff. My family has continually brought up doing the overnight ghost tour throughout the years, and while part of me is intrigued….the other part is terrified. I figured if I can handle the prison during the daytime, maybe I could consider the overnight thing.

Back to the Shawshank Hustle, the run itself began in front of the Reformatory and ended in front of the Reformatory with a lovely hilly 5 mile run through Mansfield in between (lies I was told….I thought it was only a 4 miler). This was the first year for the event, and being a seasoned racer, I had some trepidation knowing that often first time races are a hot mess, as there is typically a lack of organization and mass chaos. For those of you who love running, creepy places, and Shawshank, here is my review of the race.

-Running Course: I found the course to be really great. There were some crazy hills, but the run itself allowed me to see what a cute town Mansfield was. I found it challenging (the heat had a big part of it), but it was a good kind of challenge, and I loved seeing the Reformatory displayed in front of me as I ran the final half mile, known as Redemption Road (those of you on Periscope who tuned in saw me live broadcast as I ran into the finish).

Gary, Sharon, and I getting ready to start the race!

-Water Stops: One area that could be improved next year. There were two within the same mile (mile 2), and for a hot July morning, I definitely feel like there should’ve been another and they should’ve been spaced out some.

-Race Swag: The swag was pretty cool. All runners received a Shawshank Hustle tech shirt that glows in the dark, a custom medal upon completion, and free entrance into the Carousel and the Reformatory.

-Post Race Food: There was a good selection of your typical race food for all runners (Nans, mixed nuts, corn thins, chips, apples, and water). The post race food also included vendors with a variety of fair like foods if you were interested in gyros or funnel cakes.

-Pre/Post Race Party: The atmosphere was awesome….the individuals pumping up the crowd did a great job, fun music, plenty of Port-a-johns, and some great vendors around with merchandise and giveaways, like Saucony, hooking people up with cool headbands and other items. 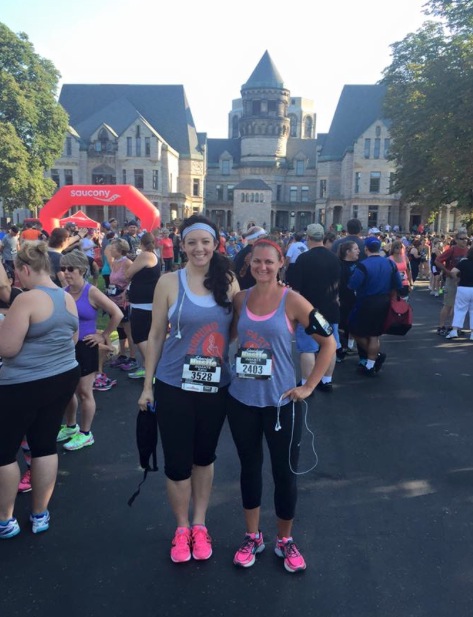 Got to run another race with one of my BFFS, Jodi!

-Transportation to and from race: This was my biggest complaint. Nearly 3000 runners participated in the Hustle, however the Reformatory was only able to accommodate 300 cars in its parking lot. Due to this fact, all runners who did not arrive in time to park at the Reformatory had to park at the Speedway about a mile away. There were shuttles to take runners back and forth, however, there were only three school buses that were actually transporting. When Gary, Sharon, and I arrived, the line to get onto the buses was over a mile long (this is not an exaggeration), and by the time we got to the front of the line, it was definitely closer to 2 miles. The delay in transportation actually caused the race directors to push the start of the race back a half hour. 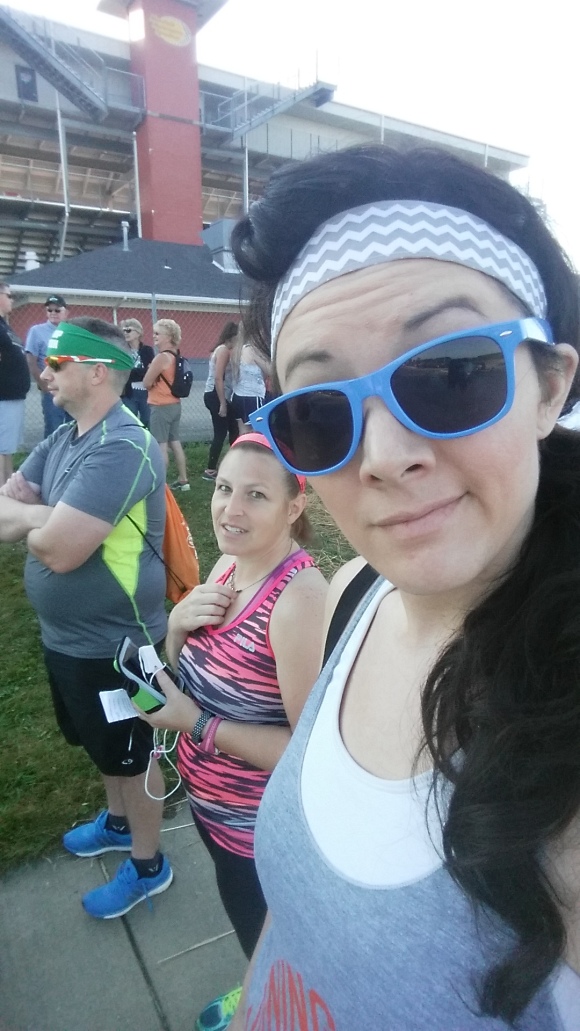 Selfie as we wait? Sure!

-Post race tour of the Reformatory: Due to the amount of runners, we all did self guided tours. I was a little concerned at first because I was interested in hearing some of the stories, but I figured if I enjoyed the tour I could always come back and take advantage of a guided tour in the future. We were able to check things out at our own pace, including the Warden’s office, the tunnel Andy Dufresne climbed to freedom using, the room where Red met with the parole board, and several other sites from the movie. In addition, we got to actually walk through the jail cell area, which was super creepy to me. Some may know that I have a little thing with heights, so the small catwalk I had to scale across past the cells was extremely uncomfortable for me. Not only did it feel like it took forever (the corridor is extremely long and narrow), but it gave me a chance to see the cells up close and personal. I must say, that is how a jail cell should be……very small and confined, gross, and uncomfortable. 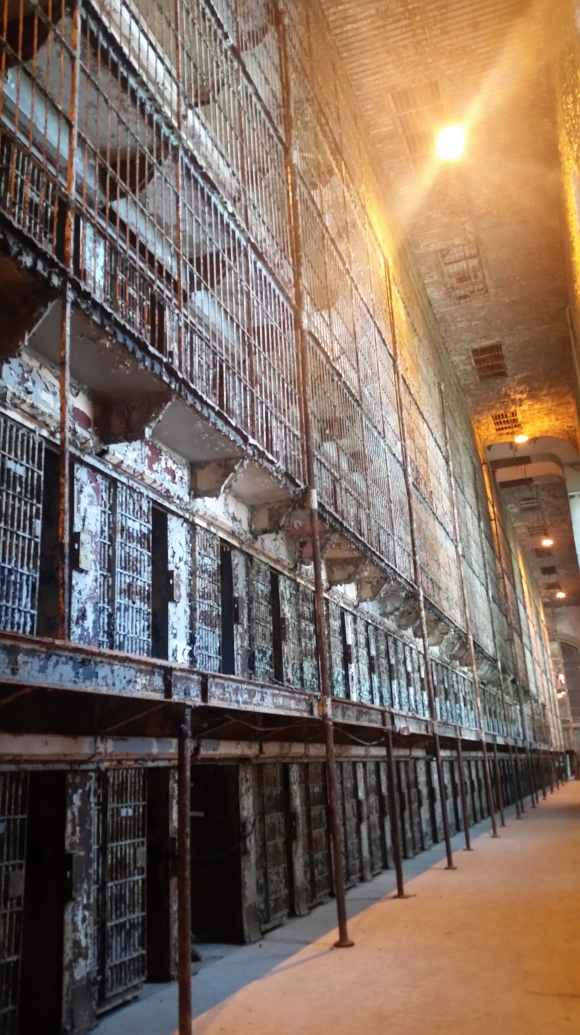 This place is def not the Hilton.

Because you should take a selfie with Brooks……

-Creepiness Factor: Somehow I missed some of the creepiest locations in the reformatory, including the tuberculosis room, however, I still felt really strange in most parts of the building. Sharon and I experienced a weird feeling of extreme pressure on our chests as we passed by one of the strange closets, but it was gone once we were past the doorway. Honestly, some of the creepiest locations were allegedly after we got out of the jail cell area, but since I was still in half panic mode because of the heights, I missed them. Maybe that’s a good thing….

After I got home, I did some research on the Reformatory, which I wish I had done before. Even though it is creepy and I was uncomfortable, my level of intrigue greatly heightened after reading some of the tales and talking to some of my friends who have completed the overnight tour. I won’t say Im sold on doing it yet, but I am way more on board with the idea than I was a month ago. We’ll see.

Bottom line: If you are a runner, this race was absolutely worth the entry fee. The minor hiccups of the shuttle system will most likely be addressed next year, and the rest of the experience was so fantastic I would highly recommend it to others. If you aren’t a runner, but you like cool places, absolutely check it out. And if you are into ghosts and have experienced something crazy there, I would love to hear about it.

Learn more about the Reformatory by visiting http://www.mrps.org.