To Dog or Not to Dog, that is the question.

Really, it’s the main question on my mind these days. Silly to most of you dog haters and insensitive people, but not silly to me. My current state of discombobulation regarding where to move is centered entirely around this question. My current lease will be up soon, and yes, this means I will be moving once again. My friends and family (mostly my mother) joke about my nomadic lifestyle all the time, but I purposely had signed a short time lease until I determined whether or not I would ever be ready to get another dog. I didn’t know how I would feel about it, but I did know that I didn’t want to rush into any decisions. Living somewhere that wouldn’t let me have a pet meant I could heal at my own pace and not get another dog as a “band aid” for the loss I was feeling. 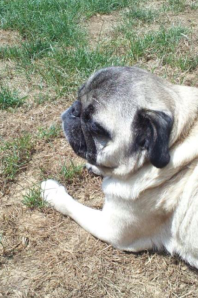 August will be one year since I lost my beloved pug, Simon, which is so hard for me to believe. I still cry almost every day about it, and it feels like it was just yesterday. There are days when I think of a funny memory or facial expression that he did and burst into laughter, only to burst into tears moments later. I guess by now I had hoped that this would’ve gotten easier for me. I’ve lost people and pets in my life before, and while their memory has always lived on, I grew stronger when it came to how I dealt with the loss with each passing day. This just isn’t happening for me. Sometimes I can talk about him with laughter and smiles, but those moments are few and far between. Usually I have difficulty just saying his name without a tear. Nearly a year later I am still angered by the events that surrounded his death. While I would love to publicly bash the piles of human garbage that harmed him, I will refrain from doing so on this blog. I know deep down that karma is even a bigger bitch than me.There is a very special place in hell for the people who harm children and animals, and there are some acts that just cannot be forgiven. This is one of those acts.

I love talking about my memories with Simon, even if they do end up with me in a sad state of mine. It does help, and since this is my blog, I can talk about whatever I want. I still remember the day I got him clear as day. I had just gotten back from a vacation with the maternal side of my family (my dad hadn’t gone with us) in Chincoteague Island. It had been a terrible summer because I spent most of it wearing one of those boots on my foot due to an injury on top of going through a pretty nasty breakup that really had destroyed my spirits. I had many discussions with my parents about getting a dog and had settled on a pug…i just love their faces. While I was on the beach, my dad went to a local pug breeder and picked Simon from the litter. He was the tiny little runt who didn’t act crazy like some of the others, and my dad thought he would be just perfect for me. I couldn’t wait until the moment I got to meet him and attempted to figure out the perfect name. There were many possibilities…Calvin and Walter were highly ranked…but eventually I settled on Simon. A music junkie who loves the band Lifehouse, I had found myself listening to the song “Simon” and felt it was perfect. Over the years, this little runt brought to me so much happiness. 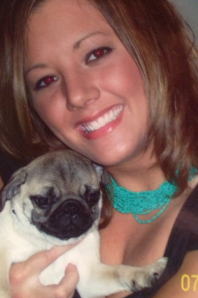 The day I met Simon for the first time! This was July 2005

So now I am in this nebulous place of “Should I or Shouldn’t I?” Remembering the joy that Simon brought to my life makes me want another dog. The sadness of losing him makes me want to avoid feeling that way over an animal again. I really miss the companionship of a dog…they really are better than most people, and the love they bring into your life is unparalleled. As much as I love pugs, I don’t know if I could get another one, at least not yet. I’ve been cruising through various pet adoption sites for dogs who need a good home, and I think that may be the route I will go. Only time will tell.

As I continue playing the game of dog adoption ping pong, I consistently think about all of the lessons I have learned from owning an animal. In my older years, my main goal in life is to be a better person, every minute of every day. It made me think of an email I received awhile back which contained the following lessons. It always makes me smile, and is so true. Who would’ve thought we would learn so much from a four legged critter who lifts its leg on fire hydrants and trees???!!!!! 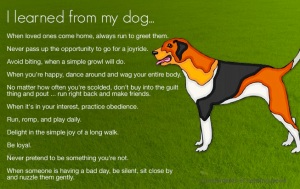 Wonderful Lessons For Us All!

2 thoughts on “To Dog or Not to Dog, that is the question.”