2 Comments
By Katie Mae Rant of the Week

RANT OF THE WEEK: I’m a loner, Dottie. A Rebel. 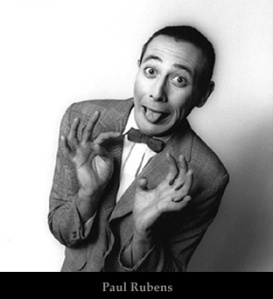 Thanks, portlandmercury.com for this lovely photo.

Up to this point, I was blissfully unaware how many people did not enjoy Pee Wee Herman, but I was about to find out. As a lover of hotel bars (and a good martini), I spent some time Sunday at the bar conveinently located on the bottom level of our hotel with Whit and some heavenly Cosmos. Being the friendly and loquacious type, we quickly made friends with the patrons and bartenders and began to engage in some ridiculous banter, mostly between us and the bartenders, Mike and Tim. Shortly after we started on our second Cosmo, one of the Ryans (they both had engaged in a tad too much alcohol the night before and slept most of the day away) managed to make it down to the bar and somehow the topic of the Alamo came up. Why, I can’t be certain, but I did ask Ryan if he had visited the basement in the Alamo. He said that he had not, and it was evident to me that no one in our group was aware that I was poking fun at a scene from Pee Wee’s Big Adventure, one of my favorite childhood movies. There was not a basement in the Alamo. I learned that as Pee Wee was on a quest to find his beloved bike!

Yes, I am aware that Paul Reubens aka Pee Wee was caught back in the early 90’s for beating his meat like it owed him money in a movie theater and was subsequently arrested for indecent exposure. However, I truly loved his movies (in addition to the wonderful television series Pee Wee’s Playhouse), and I catch myself more often than I care to admit referencing one of his funny lines.

After I realized that Ryan, Whit, and Mike the bartender did not appreciate Pee Wee, I removed myself from the conversation and started my own discussion with Tim, the other bartender who was hip to Pee Wee. Finally, someone who understood! I do love Pee Wee’s humor, but the one thing that drew me to Pee Wee’s movies and show was its whimsical set. I am an artist by nature (a whimsical, obscure one at that), and I am drawn to artists who surprise me with colorful elements and weird, off the wall pieces. Enter the set of Pee Wee’s playhouse. I remember watching the show with my brother every Saturday morning and being mesmerized by the crazy chairs and the colors of each room.  To me, it is the ultimate display of creativity. To others, it was the funhouse of some creepy pervert. Let’s get real though…anyone who watched that show wanted that insane kitchen to cook them breakfast!!!!

You better believe that I had ordered that sucker off of ebay within two seconds. I am patiently awaiting its arrival to see if it is as good as Tim claimed, but I am extremely excited to learn more about the creative mind of White. Of course, me notifying the Ryans and Whit that I had purchased some fun Pee Wee stuff did cause them to poke some fun at me (ok, I did get Pee Wee’s Big Adventure, too. I should’ve already owned it, I’m disgusted I didn’t already). Haters. You don’t know what you are missing. If you haven’t seen anything Pee Wee, drop everything and go rent one of his flicks.